The Bay Owl (Phodilus badius Horsfield) (see depiction) is native to Southeast Asia, where several subspecies have been described; the biology of the species is still rather unknown.

The Samar Bay Owl from the island of Samar in the Philippines was described in 1927 based on a single specimen which has subsequently been lost due a bombing raid in World War II.; this form, however, is not accepted by all biologists. 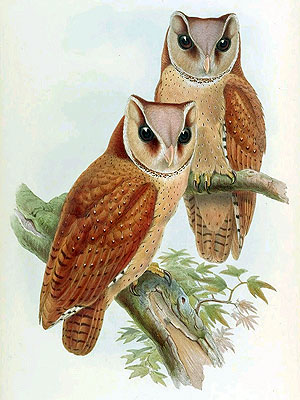 Depiction from: John Gould; Richard B. Sharpe: The Birds of Asia. London: printed by Taylor and Francis, published by the author 1850-1883