The Eelgrass Limpet aka. Bowl Limpet was described in 1831; it lived in the western Atlantic Ocean and was once quite common and widespread, having been found from Labrador in Canada as far south as New York, USA.

The species was adapted to inhabit the leaf blades of Eelgrass (Zostera marina L.); large parts of the eelgrass colonies along the western Atlantic coastlines suddenly died in the early 1930s by a disease caused by a slime mold. The eelgrass survived only because some populations inhabited brackish water into which the mold could not spread; the limpet, however, was not able to adapt to brackish water and thus the whole species died out due to the complete loss of its only habitat and host.

The Eelgrass Limpet was last seen in 1929 but was declared extinct only in 2000; another subspecies, the Pacific Eelgrass Limpet (Lottia alveus ssp. parallella (Dall)) (see photo), still survives in the waters of the northern Pacific Ocean. 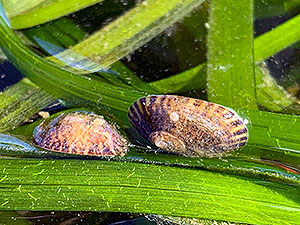