The Tar Pit Scarab was described in 1946; it is known only based on subfossil remains that were found in the Late Pleistocene La Brea tar pits in Los Angeles, California, USA; its closest living relatives can be found today in Arizona, USA and in Mexico, for example the Scooped Scarab (Onthophagus hecate (Panzer)) (see photo).

The beetle vanished from California along with the disappearance of its food source, the dung of large plant-eating mammals, which again died out due to the drying of the climate at the border of the Late Pleistocene/Early Holocene 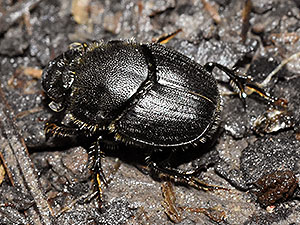