The Western Rufous Bristlebird, a slightly smaller subspecies of the Rufous Bristlebird, was discovered in 1901 at a place named Ellensbrook near the Margaret River in Western Australia, it was described as a new species in 1902 based on a single specimen. [1]

The bird inhabited an extremely restricted range, an about 50 km long stretch of coastal scrub between Cape Naturaliste and Cape Mentelle in the south-western part of Western Australia, where it inhabited dense, stunted shrubland on cliffs and dunes.

The last reliable record took place in 1908, when a second specimen was collected; since then there have been some unconfirmed sightings only and the Western Rufous Bristlebird has finally been listed as extinct in 1999. The reason for its extinction is thought to be the destruction of its shrubland habitat which was repeatedly burnt in the early 20th century to create pasture.

Everything that we know today about the life of this bird comes from the notices of its discoverer.:

“The food of the bird, as revealed by dissection, consisted wholly of land snails, those marine-like looking forms which are found in abundance on the coastal limestone hills, apparently lifeless in hot weather, but full of vitality after a shower of rain. One snail, with the shell perfect, was found in the stomach.” [1] 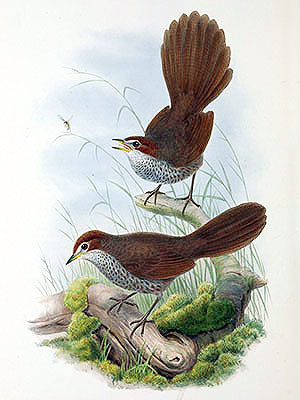