The Chestnut Clearwing Moth, as its vernacular name implies, was adapted to the American Chestnut tree (

Castanea dentata (Marsh.) Borkh.) as its sole larval host plant. The populations of that tree species broke down after the introduction of a fatal disease, the chestnut blight, caused by a fungus (Cryphonectria parasitica(Murrill) M. E. Barr), that was accidently brought to northern America in the 19th century. The loss of large stands of American Chestnut led to the extinction of several insect species that had adapted to them as their host plant.

This species, however, is only known from the type series, and was only aver found near Falls Church in Virginia; it may turn out to be identical with (Coptotricha zelleriella (Clemens)), a very widespread species that appears not to be adapted to any specific plant species. 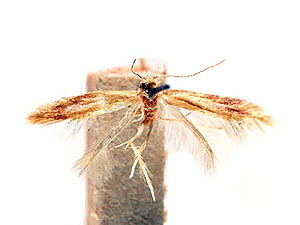