The island of Rennell is about 654 km² large and lies in the southeastern part of the Solomon islands chain; the easternmost part of that island is covered by a very large former lagoon which is now closed and filled with freshwater –  Lake Tenggano.

This lake was the sole home of a somewhat enigmatic duck, the Rennell Island Teal, which officially is considered a subspecies of the Sunda Teal (Anas gibberifrons Müller), a species that actually only inhabits parts of Indonesia, thus this assignment is probably quite wrong and it more likely should be assigned to the Grey Teal (Anas gracilis Buller) (see photo below).

The Rennell Island Teal differed only slightly from the Grey Teal and may in fact just have been a resident population of this very widespread trampy species.

The native duck population of Rennell Island begun to dwindle after the introduction of Mozambique Tilapias (Oreochromis mossambicus (W. K. H. Peters)) into Lake Tenggano; the last ducks were finally seen in 1959. 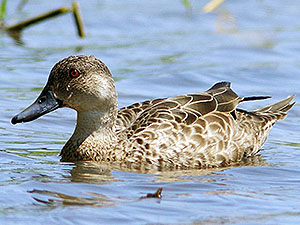