The Oceanic Eclectus Parrot was described in 2006 based on subfossil remains that were recovered from archaeological sites in Tonga and Vanuatu.

The species almost certainly has survived into the late 18th century, because it apparently was depicted by an unknown artist during Alessandro Malaspina’s Pacific Expedition in 1793 (see depiction below) on the island of ‘Uta Vava’u, Tonga. 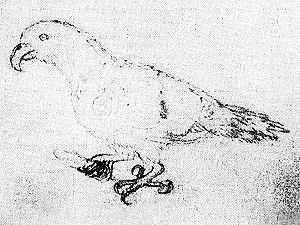 Depiction made during the Malaspina Expedition between 1789 & 1794