Stokes’ Bushwren was endemic to Stewart Island and some of the small islets surrounding it, including Kotiwhenua- and Taukihepa Islands.

The form disappeared from Stewart Island already at the beginning of the 20th century but was still reasonably common on some of the offshore islets and survived on the predator-free Taukihepa Island until the invasion by Black Rats (Rattus rattus (L.)) in 1964. The New Zealand Wildlife Service attempted to save the species by relocating all the birds they could capture. They caught six birds and transferred them to Kaimohu Island, where, unfortunately, they did not survive and finally died out in 1972.

There are some photos taken in 1913 by Herbert Guthrie-Smith on Taukihepa (Big South Cape) Island, one is shown below. 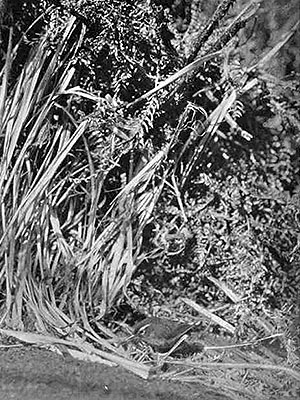 Photo from: “Herbert Guthrie-Smith: Bird Life on Island and Shore. 1925”