The Thick Auriculella Snail was described in 1873, it was endemic to the island of Maui, Hawaiian Islands where it apparently was quite common.

Several varieties are known, of which some were originally described as distinct species.:

“This species runs through a number of color varieties, the most common of which is an olive yellow; others have the spire dark, and the suture broadly white-bordered. The white-belted pattern, though it occurs in nearly all the species of this genus, and is fairly common in A. uniplicata, does not seem to be found in this species; at least no specimen of this color variety was found among over 1500 specimens seen, but there is sometimes a brown belt at the periphery. The spire is nearly always darker than the last whorl, and there is usually a broad white band just below the suture.” [1]

The species is now extinct like so many of the terrestrial snail species from the Hawaiian Islands. 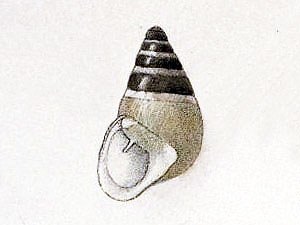