This species was described in 1921, it is apparently known from only four specimens that were collected on the islands of Mahé and Silhouette, Seychelles Islands.

The last specimen, a male, was obviously collected in 1969, since that date there has not been any trace of this species, which is now feared to be extinct. 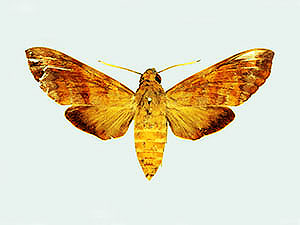 Photo: The Trustees of the Natural History Museum, London
http://sphingidae.myspecies.info/file-colorboxed/9071