The Jamaican Rice Rat was described in 1898; it was restricted to the island of Jamaica.

The species reached a size of about 26 cm (including the tail); it was furthermore described as: “Color. Above rufous sparsely lined with black, brightest on the rump; head suffused with grayish; under parts yellowish, hairs gray at base; tail pale brown above, lighter beneath; hands and feet whitish; ears blackish outside, yellowish inside.“. [1]

In 1872, Small Indian Mongooses (Urva auropunctata (Hodgson)) had been imported to Jamaica to control the likewise introduced rats in the sugarcane plantations; the mongooses, however, were also very effective in eradicating the native rodents. Feral cats and dogs certainly played their part too and finally, in 1877, the Jamaican Rice Rats were seen for the last time.

[1] Daniel Giraud Elliot: The Land and Sea Mammals of Middle America and the West Indies. Publication of the field Columbian Museum, Zoological Series 4(1). 1904 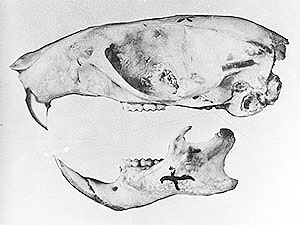