The Aged Amastra Snail is one of many forms of its genus that are actually known only based on (sub)fossil material; this one was found in deposits of the Hanama’ulu plains near the eastern coast of Kaua’i, Hawaiian Islands.

“This extremely variable form is abundant in road cuttings on the coastal plain south of the Wailua river. There are several distinct forms found associated in the different deposits. The typical form described above might be considered a distinct species if it did not occur with numerous intergrades of other forms which closely approach A. rugulosa normalis. A constant differentiating character between all these specimens of annosa and normalis is the very weak, oblique, deeply situated columellar fold of the former. Some of the specimens of annosa at first glance seem to belong to the subgenus Cyclamastra but the embryonic whorls are less convex than those of any species of this subgenus.” [1] 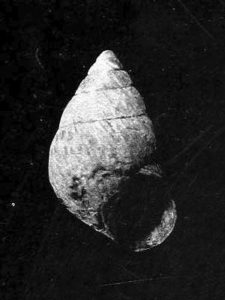