The Bordered Bocula Moth was described in 1888; it is, or rather was, restricted to Christmas Island in the Indian Ocean.

The species has not been found since the 1930s and is thought to be extinct now. [1] 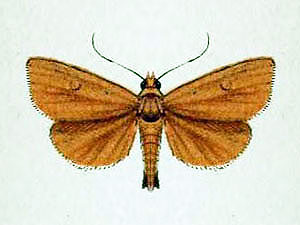 Depiction from: ‘Charles William Andrews: A monograph of Christmas Island (Indian Ocean). London: printed by order of the Trustees 1900’