The Ogasawara Holly Blue, described in 1886, is endemic to the Ogasawara Islands, where it appears to have been quite common until the 1970s, when its populations began to crash, mainly caused by the loss of their preferred host plant species due to the native vegetation being overrun by introduced invasive alien plants and because of increasing predation by likewise introduced Green Anoles (

Anolis carolinensis Voigt), whose populations are now as high as about 6 million individuals. [1]

The species appears to be extinct in the wild since 2018, when the last individuals were seen.

For some time there had been attempts to establish a captive program: the species was kept in captivity since 2005, once in the Tama Zoological Park and then in the Shinjuku Gyoen National Garden, both in Tokyo, Japan.

However, these efforts apparently failed, and the last individuals apparently died in 2020.

The Ogasawara Holly Blue is now feared to have been lost. 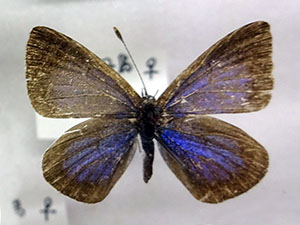