The Yellow Gorgon can be spilt into about six subspecies, which occur from parts of China and India to Indonesia.

The species itself seems not to be threatened yet, however, the nominate form, which was restricted to the island of Java, Indonesia, appears to be extinct now.

The photo below shows another subspecies. 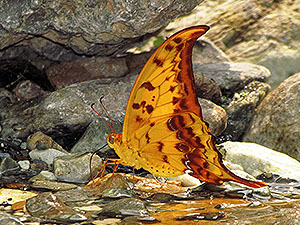