The Rough Saint Helena Weevil was described in 1877, as its name implies, it is, or maybe was, endemic to the island of Saint Helena in the middle of the Atlantic Ocean.

The species seems to have been adapted to the likewise endemic Scrubwood (Commidendrum rugosum (Dryand) DC.), and was apparently already very rare when it was discovered.:

“I have seen hitherto but a single example of this curious and well-marked Acanthomerus, – which was taken by Mr. P. Whitehead, amongst the viscous shrubs of the scrubwood (or Aster glutinosus, Hk. f.) [Commidendrum rugosum], on the Barn. It must be regarded therefore as a scrubwood species; and I may add that there are few members of the scrubwood fauna (as yet brought to light) which are more interesting than the A. asperatus.”

The Rough Saint Helena Weevil was not found during the most recent field surveys and might well be extinct. 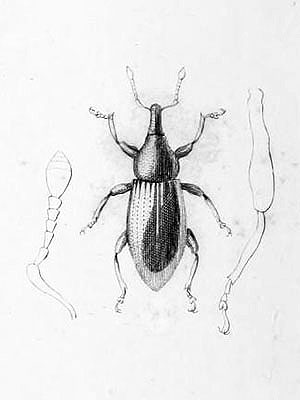 The Collared Saint Helena Weevil was described in 1869; it is, or maybe was, endemic to the island of Saint Helena, where it appears to have been quite common and widespread once.:

“This is the common Acanthomerus at Plantation, – where it swarms in the dead branches and trunks of the various species of oak, as well as in the crevices of old posts &c.; and I am inclined to think that it be should looked upon as having been attached originally to the gumwoods, which must once have been dominant throughout that district; and I have taken it amongst the gumwoods at Thompson’s Wood, where, however, it is less abundant than the A. ellipticus. At any rate it is more particularly a species of intermediate altitudes; though I believe that on one occasion I met with a single example of it towards the central ridge.” [1]

The species was not found during the most recent field searches and is believed to be possibly extinct.