This species was described in 1997, apparently based on collections made in 1978 in the Izmir Province of Turkey.

The species was not found since and might be extinct.

The Beautiful Lord Howe Longhorn Beetle was described in 1889; it was endemic to lord Howe Island, Australia.

The species reached a length of 1 cm; it was “Elongate, very convex, narrowed both in front and behind, bronze green, shining, tinged with purple, very sparingly clothed with erect testaceous setae; elytra strongly punctured near the base; antennae, tibiae, and tarsi pale reddish testaceous; femora fuscous. Head transverse, finely and sparingly pubescent, with a few punctures on the disc; the median line distinct. Antennae with the third joint rather longer than the first, the succeeding joints slightly decreasing in length. Prothorax longer than broad, less narrowed in front than behind, sub-cylindrical, rather strongly and closely punctured, the punctures less strong anteriorly, clothed with very fine pubescence and scattered setae. Scutellum triangular, very small. Elytra elongate-ovate, the punctuation strong and moderately dense near the base, gradually effaced posteriorly, clothed with very fine gray pubescence near the suture and at the sides, with four rows of long erect setae which emanate from punctures, and are separated by considerable intervals; each elytron with three longitudinal elevations on the basal half, of which the first only is conspicuous. Legs moderately long, finely pubescent; the femora thickened.” [1]

The species has not been collected since the 1910s and is now considered most likely extinct. [2] 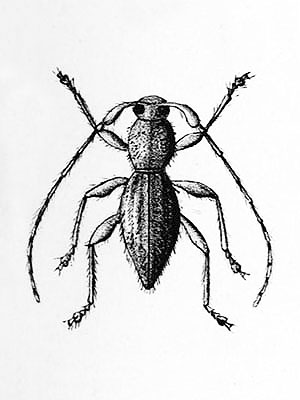 Wollaston’s Lord Howe Longhorn Beetle is endemic to Lord Howe Island; it was described in 1856, was apparently only seen one time after 1916 and might now be extinct.