This species was described in 1933, apparently based on a single specimen, a female: it has a wingspan of 2,2 cm; its wings have a light pinkish cinnamon color and bear several darker and lighter colored markings. [1]

The species was not found since and is considered possibly extinct. [2]

The species hasn’t been seen since the 1930s and might well be extinct. [1]

The Wailuku Pug Moth was described in 1899, it is known only from the male type specimen.

The species reaches a wingspan of about 1,7 cm, it is rather pale and narrow-winged, there are obscure medial bands on its forewings that are marked by a series of short, disconnected longitudinal dashes.

The species inhabited the native rain forest above a place named Wailuku on the island of Moloka’i, Hawaiian Islands, a habitat that is now heavily degraded by introduced mammalian herbivores.

The Wailuku Pug Moth was never recorded since its description and is likely extinct. [1][2]

Regina’s Comostolopsis Geometer Moth was described in 1915 based on specimens that had been collected in the years between 1897 and 1898 on Christmas Island in the Indian Ocean.

The species was apparently never found since and might be extinct.

This species is endemic to the South Island of New Zealand and was once quite common.

The population of the species started to decline sometime after the 1940s and was recorded only twice since, once in 1979 and then again for the last time in 1991; since then, the species is lost and might in fact be completely extinct. [1]

The nominate form reaches a wingspan of about 2,5 cm; the subspecies discussed here, is smaller and is also lighter, more cream-colored. 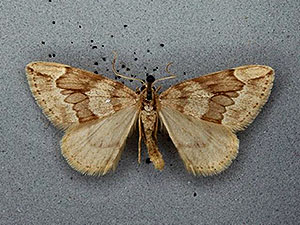 Photo: © The Trustees of the Natural History Museum, London

The Ukulele Pug Moth was described in 1899, it is known only from the female type specimen.

The species reaches a wingspan of about 1,9 cm, it was originally described as being green, but the sole surviving specimen has faded so much that there is no green color any more, instead it shows some plae cream colored areas, some scales are orange – or rosy-tipped.

The Ukulele Pug Moth inhabited native rain forest areas at a place named Ukulele somewhere in the Haleakala region of eastern Maui, Hawaiian Islands, the habitat is now heavily degraded by introduced mammalian herbivores and the species, which was never found since its description, may already be extinct.

The Koolau Giant Looper Moth was described in 1901, it is known only from the type specimen, which was found in the northwest part of the Ko’olau Mountains on the island of O’ahu, Hawaiian Islands.

The genus Scotorythra is restricted in its distribution to the islands of the Hawaiian Archipelago and contains about 38 species.

The Kona Giant Looper Moth was described in 1899, it is apparently known exclusively from female specimens.

The species was found in the Ola’a forest on the slopes of the Kilauea volcano in the southeastern part of Big Island, but also in the Kona district in the western part of the island.

The Kona Giant Looper Moth reached a wingspan of about 7,2 to 8,7 cm and was thus one of the largest lepidopteran species on the Hawaiian Islands. [1]

The Juniper Looper (Eupithecia pusillata (Denis & Schiffermüller)) aka. Juniper Pug is distributed over the whole of the nearctic- and palearctic region with the nominate race living in Europe, including the British Isles.

The form, discussed here, was described as a distinct subspecies, which obviously has always been restricted to only a few places in the English shires of Devon and Staffordshire – the validity of if this form, however, is questionable.

The English form reached a wingspan of 1,8 to 2 cm, and is considered extinct since about the middle of the 19th century (?).