The Many-toothed Saint Helena Snail was described in 1844 based on subfossil shells that were collected from a place named Sugarloaf Quarry on the island of Saint Helena.

The species’ author gives some information about the form of the shells.:

“This is the most widely umbilicated of all the species of Patula from St. Helena, and this feature alone is sufficient to distinguish it from the rest. The whorls also, in adult shells eight to nine in number, enlarge very slowly. The striae are fine, regular, arcuately oblique above, and slightly wavy on the last whorl. There are three parietal lirae extending far within the aperture, of which the upper and lower are nearly always double. The plicae within the outer lip are almost invariably (in adult shells) seven in number, subequidistant, but not of equal thickness, two or three towards the columella being stouter than the rest, which are slender and extend some distance within.” [1] 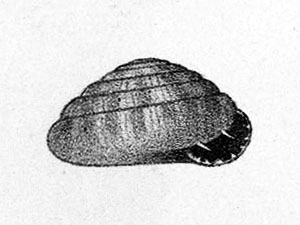