This form is known only from reports from the 1850s as well as from subfossil remains that were recovered from deposits on the island of Maui, Hawaiian Islands.

Taken into account the fact that all known island forms of the species are considered distinct subspecies, the form that formerly inhabited the island of Maui, must also have been a distinct form.

The Lanai Thrush was described in 1891. This thrush, which the Hawaiians called Oloma’o or Olomau, was restricted to the islands that formerly formed Maui-nui: Lana’i, Maui, and Moloka’i, Hawaiian Islands, with each of these islands harboring its own endemic subspecies respectively.

All of them are now extinct.

“The specimens from Lanai, the island from which Wilson’s type came, are as a rule much white below, and the majority of them have the brown of the back somewhat less bright. As the measurements of their wings show, there is also a decided tendency to longer wings in the Molokai birds, but the longest of those from Lanai surpass several of those from Molokai. There is nothing extraordinary in it if we assume that the Phaeornis, inhabiting also low-lying regions, crosses from Lanai to Molokai, and therefore is the same species on both islands … The Olomao, as it is called, both on Lanai and Molokai, is not rare on both these islands, and Palmer saw it in the lowland as well as at the highest elevations. In the stomachs he found seeds and berries of different plants. When seen on a tree they were generally shaking their wings or “trembling,” as Palmer calls it. They have that clear call-note peculiar to this group, and also another deep hoarse cry. Their song is “of a jerky nature,” and consists of several clear notes.” [1]

The Lanai Thrush disappeared soon after the establishment and subsequent development of Lana’i City in the center of the island in 1923, it was last seen only 10 years later in 1933.

The Oloma’o certainly also inhabited the island of Kaho’olawe, probably with another endemic subspecies, before the island was completely devastated.

[1] W. Rothschild: The Avifauna of Laysan and the neighbouring islands with a complete history to date of the birds of the Hawaiian possession. 1893-1900

The Cuban Solitaire (Myadestes elisabeth (Lembeye)) [see photo] is endemic to the island of Cuba, where it apparently inhabits moist montane forests.

The species also inhabited Isla de la Juventud off the southern coast of Cuba, these birds, however differed from the Cuban birds and thus were described in 1905 as a distinct subspecies.

“Similar to M. e. elizabeth, but still smaller, narrower, and more pointed, and coloration clearer and grayer, the upper parts nearly mouse gray instead of deep hair brown or olive, the under parts nearly pure white passing into very pale clear gray on chest and sides of breast.” [1]

The Isle of Pines Solitaire disappeared due to the destruction of its habitat, an ill fate that now also seems to befall the Cuban Solitaire which is officially listed as ‘Near Threatened’.

[1] Robert Ridgway: The birds of North and Middle America: A descriptive catalogue of the higher groups, genera, species, and subspecies of birds known to occur in North America, from the arctic lands to the isthmus of Panama, the West Indies and other islands of the Caribbean sea, and the Galapagos Archipelago. Bulletin of the United States National Museum 50(4). 1907

The Oahu Thrush, locally known as ‘āmaui, was described in 1899; it was restricted to the island of O’ahu, Hawaiian Islands.

The only record of the species in life comes from the diary of Andrew Bloxam, a naturalist that was on board of the HMS Blonde which anchored off the coast of the island of O’ahu in 1825; he also took the only specimen that apparently still survives until today.:

“We soon began to ascend the pass the sun rising at the time amid the chirping of small birds and the melodious notes of a brown thrush, the only songster on the islands.”

The Oahu Thrush was never found again since.

The Molokai Thrush, described in 1891, was restricted to the island of Moloka’i, Hawaiian Islands.

The thrush was considered very common in the 19th century but its populations began to collapse due to deforestation and the unintentional introduction of avian malaria onto the islands and it is now extinct.

The Large Kauai Thrush, known to the native Hawaiians as kāma’o, was described in 1887; as its name implies, it was endemic to the island of Kaua’i.

It was the largest member of its genus on the islands, and it inhabited its home together with another congeneric species, the Small Kauai Thrush, aka. puaiohi, (Myadestes palmeri (Rothschild)), which is still surviving until today.

The Large Kauai Thrush was considered very common at the beginning of the 1800s and was found throughout the island, however, the destruction of the island forests and the unintentional introduction of avian malaria onto the islands took their toll on the birds and their populations collapsed.

The last sighting took place in 1989 in the infamous Alaka’i Wilderness Preserve, which was the last fortress for a number of endemic bird species; and like so many other Hawaiian birds, also the kāma’o is now extinct. 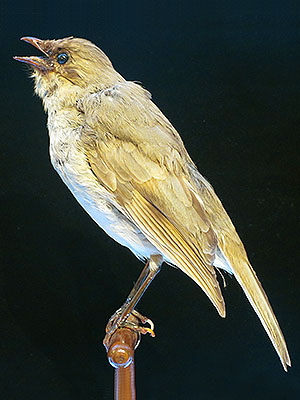