The Mariana Parrot Finch is known only from a subfossil humerus that was recovered from deposits on the island of Rota in the Mariana Islands; this single bone can be referred to that genus based on several characters but is larger than that of any congeneric species.

The species may have reached a length of about 15 cm, making it one of the largest members of its whole family; it was very likely most closely related to the Blue-faced Parrotfinch (Erythrura trichroa (Kittlitz)) (see depiction), a species that still occurs in parts of Micronesia today. [1] 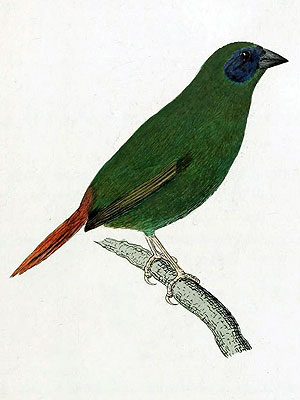 The Rota Duck is known so far only from subfossil bones that were recovered from deposits on the island of Rota in the Mariana Islands.

The species was small and probably flightless, not much else is known about it so far. [1]

Since the undescribed Tinian Swamphen (Porphyrio sp. ‘Tinian’) apparently was a flightless species, it is rather unlikely that the same species also inhabited Rota, thus the Rotan birds almost certainly were a distinct, though closely related species. [1]

It might be of interest that the Purple Swamphen (Porphyrio melanotus (Temminck)) apparently is trying to reestablish a population in Micronesia. [2]

The Large Mariana Islands Ground Dove is known so far only from subfossil remains that were recovered from sites on the island of Rota, Mariana Islands.

The species was formerly sympatric with the congeneric White-throated Ground Dove (Pampusana xanthonura (Temminck)), which is still alive, but was apparently larger. [1]

This species was described in 2013 based on subfossil shells that were recovered from Holocene deposits on the island of Rota, Mariana Islands.

The species occurred sympatrically with the Humped Tree-Snail (Partula gibba Férussac), which, however, still survives until today.

The Mariana Wandering Butterfly was restricted to the islands of Guam and Rota in the southern part of the Mariana Islands chain.

The butterfly inhabited the forests on the lime cliffs wherever Luluhut (Maytenus thompsonii (Merr.) Fosberg), the food plant of its caterpillars was found. [1]

The local name of this butterfly is Ababbang (in Chamorro), bzw. Libwueibogh (in Carolinian).

The species was last seen on Guam in 1979 and is considered as being extinct at least there, the last record of the species on the neighboring island of Rota took place in 1995, when only some male specimens were found but no female ones nor any eggs or caterpillars.

The Mariana Wandering Butterfly is now most likely globally extinct.