The Purple Saxifrage (Saxifraga oppositifolia L.) is split into about eight to ten subspecies which are found in arctic, sub-arctic and mountainous regions of North America, Asia and Europe, one, the one discussed here, was restricted to the shores of Lake Constance located between Austria, Germany and Switzerland.

The plants grew in the beach-meadows, together with at least two other, local endemic plant species; about 30 populations were known, the last of the Bavarian populations disappeared at around 1959 while others survived until at least to 1978; however, this form is now completely extinct. 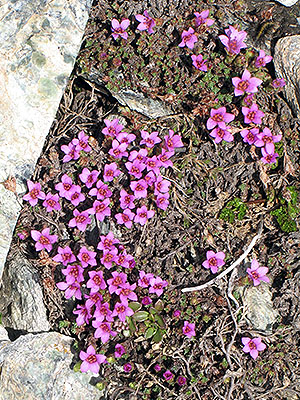