The Domed Rodrigues Giant Tortoise was one of two tortoise species that formerly were endemic to the island of Rodrigues in the Mascarene Islands.

The species disappeared after the island was settled by Europeans in the 16th century, the last individuals survived apparently until the very beginning of the 19th century.

The Saddle-backed Rodrigues Giant Tortoise was endemic to the island of Rodrigues, Mascarene Islands in the Indian Ocean.

The species was heavily hunted by the European settlers in the 16th century for its meat and was finally wiped out at the end of the 18th century. 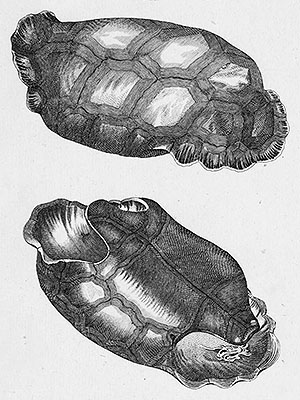 The Thick-shielded Tortoise is known from fossil remains that can bedated to an Late Pleistocene to the earliest Holocene age, about 9500 BC, so falls just into the timespan that is covered by this blog.

The carapace of this rather large form reached a length of over 1 m.

Wilson’s Tortoise is a Pleistocene species that apparently survived into the earliest Holocene, about 9050 BC, so falls just within the timespan this blog is covereing.

The carapace of this species reached a length of about 23 cm.

The Saddle-backed Mauritius Giant Tortoise, as its name implies, was endemic to the island of Mauritius (including several of the smaller offshore islets), Mascarene Islands in the Indian Ocean.

The species had a saddle-shaped carapace, a somewhat upright stand and was adapted for brousing higher vegetation.

When the Mascarene Islands were settled by Europenas in the 16th century, thousands of the endemic tortoise species were slaughtered for their meat and imported feral animals like cats, pigs and rats fed on the tortoises eggs and hatchlings.

The Saddle-backed Mauritius Giant Tortoise was extinct on Mauritius by the beginning of the 18th century, but a small population survived on the offshore Round Island for some additional decades. This last population, however, was doomed, its small island refuge was overrun by introduced goats and rabbits which finally destroyed the whole vegetation, leaving the tortoises starving to dead at around 1845.

The Domed Mauritius Giant Tortoise was endemic to the island of Mauritius (including several of the small offshore islets), Mascarene Islands.

The species had a dome-shaped carapace and appears to have been adapted for grazing lower vegetation.

The Domed Mauritius Giant Tortoise disappeared from Mauritius around 1700, with some populations surviving on the surrounding islets for several decades.

This species is known from subfossil remains that were found on Mona Island, a small island halfway between Hispaniola and Puerto Rico.

The species has probably survived until the first human settlers appeared at around 3000 BP.

There also appears to exist a painting in a cave on the island that obviously depicts such a tortoise.

The Isla Santa Fé, also known as Barrington Island, is a small, only about 24 km² large island, but may very well have once harbored its own endemic population of tortoises.

There are three reasons to assume the former existence of a local population.:

Firstly: Contemporaneous accounts by settlers and whalers, the latest of which dating from 1890, which also mention tortoise hunts on the island.

Secondly: Subfossil and recent tortoise bones are well known from the island, yet no part of a carapace is known, thus the exact status of these remains cannot be ascertained.

However, tortoises were transported in the 19th century from one island to another, without any kind of registering, thus these two abovementioned reasons may in fact also apply to a imported tortoise population.  But there is still the third and best reason ….

Thirdly: By far the best evidence for the former existence of a endemic tortoise population comes from the island’s flora – the Barrington Island Tree Opuntia (Opuntia echios var. barringtonensis E. Y. Dawson) is an endemic variety of the typical tree-like opuntias that have evolved only on islands with tortoises, while the opuntia forms on tortoise-free islands are always growing as low creeping bushes, because, in the absence of large herbivorous tortoises they just did not need to develop a trunk.

Thus there simply must have been a local race or species of tortoise on the Isla Santa Fé!

In spite of everything, the Santa Fe Tortoise is still officially regarded as a hypothetical form.

This species was described in 1877, it was endemic to the somewhat isolated Isla Pinta aka. Abingdon Island in the northern part of the Galápagos archipelago.

The species was thought to be extinct, when in 1971, a last individual was located, it was a male that was named ‘Lonesome George’ and was relocated to the Charles Darwin Research Station on Isla Santa Cruz for his safety.

Several attempts at mating Lonesome George with females of other tortoise species were unsuccessful, possibly because his species was not cross-fertile with the other species.

It seems that there are still some individuals in existence that at least harbor some DNA of this extinct species within their blood.

The Giant Cuban Tortoise was endemic to the island of Cuba; the species disappeared sometimes during the Holocene, very likely due direct hunting pressure by the first human settlers.

The Reunion Giant Tortoise was described in 1783, it was endemic to the island of Réunion, Mascarene Islands in the Indian Ocean, where it formerly was extremely numerous, forming large herds.

The species was the largest within its genus, with carapace lenghts of 0,5 to 1,1 m.

There appear to have been both dome-shaped as well as saddle-shaped individuals in this species and they may in fact constitute two distinct species, as it is the case on the two neigboring islands of Mauritius and Rodrigues, which each harbored two endemic tortoise species once.

The tortoises were killed by the first European settlers but also caught in vast numbers by sailors to be stacked into the holds of their ships, where they, simply being turned on their backs condemned to die a horrible slow death, provided a source of fresh meat for months.

The species disappeared at the beginning of the 18th century with the last remaining individuals surviving in hidden spots on the highlands until around 1840.