The Small Seychelles Swallowtail was described in 1879; it was endemic to the Seychelles in the Indian Ocean; it is apparently known from only two specimens, a male and a female, which were collected sometimes prior to 1880.

The Seychelles subspecies differed from the nominate form from Réunion by being approximately half their size.

This form is now clearly extinct; yet it may not even have been a distinct subspecies, because some entomologists think that the form was just accidently introduced from Réunion with the import of citrus plants, which are one of the known larval food plants of this species. The markedly small individuals found on the Seychelles may then probably just have been some kind of puny form, that for some unknown reason just stayed smaller than usual. [2]

The following account refers to the nominate form which inhabits the island of Réunion.:

“Confined to Bourbon [Réunion], where it is known as P. disparilis, Boisd. Common, not to say abundant, on the coast and up to about 2,000 feet. I never saw a single specimen at 3,000 feet, and its distribution is no doubt determined by the food plant. It feeds on citron, and the larva has been figured and described by Vinson. It is no doubt unpalatable in the larval stage. The female is aberrant, and is an admirable example of what Scudder calls “colourational antigeny” in which it is the female that departs from the normal colouring of the group to which the species belongs. It is presumably a mimic of Euploea goudoti, and in such a small island as Réunion the exciting cause should not be difficult to discover. I may say fairly confidently that there is no bird now existing which makes any marked ravages among the butterflies. Indeed birds are conspicuous by their absence, and are as rare in Réunion as they are in France and Italy, and for the same reason; affording a marked contrast to Mauritius, where they are protected and consequently abundant.
I was informed, however, by Dr. Jacob, who has resided for some fifty years in Réunion, that at one time the now extinct “starling” (Fregilupus varius) was decidedly common, especially in those parts more particularly frequented by P. phorbanta, and, judging by the stuffed specimen in the St. Denys Museum, I should say that the bird was entirely insectivorous. I throw out the suggestion that it was this bird that was the main cause of this case of mimicry.” [1]

[1] N. Manders: The butterflies of Mauritius and Bourbon. Transactions of the Entomological Society of London 429-454. 1907
[2] James M. Lawrence: A short note on the biogeography of the rarely observed Seychelles butterflies. Phelsuma 23: 1-5. 2015 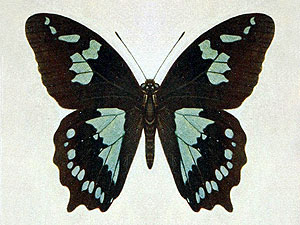 Depiction from: ‘N. Manders: The butterflies of Mauritius and Bourbon. Transactions of the Entomological Society of London 429-454. 1907’