The Scarce Mountain Copper is a little butterfly species with at least four subspecies that occur in some regions of South Africa; the nominate form from the Cape Peninsula is thought to be extinct.

The last known population that was known to exist in the late 1980s inhabited an extremely small area and counted only some 20 to 50 individuals; they apparently disappeared due to forest fires that occurred too often and got out of control.

The photo below shows an individual from another subspecies, the Cederberg Scarce Mountain Copper (Trimenia malagrida ssp. cedrusmontana (Dickson & Stephen)). 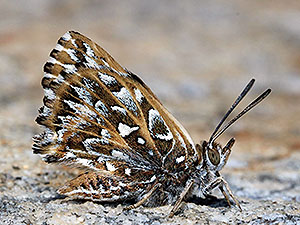