hopue by the native Hawaiians, was already nearly extinct when it was discovered by European ornithologists.

The species originally inhabited dry lowland forests that were dominated by the endemic koa acacias (Acacia koa A. Gray) whose seed pods and seeds apparently were its main food source, it furthermore fed on the seeds of the native ‘a’ali’i (Dodonaea viscosa Jacq.) and caterpillars. Most of the lowland forests had already been destroyed by the Hawaiian natives long before the first European settlers arrived, and the finches were restricted to the small remains in the northern Kona District in the western part of Hawai’i.

When alive, Greater Koa Finch was by far the largest of the Hawaiian endemic drepanidine finches; it reached a size of 23 cm; the males had bright scarlet-orange heads and breasts, while the females were more or less completely plain green colored. 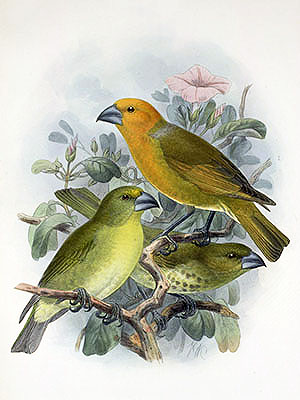 Depiction from: ‘W. Rothschild: The Avifauna of Laysan and the neighbouring islands with a complete history to date of the birds of the Hawaiian possession. 1893-1900’