Ripken’s Wollastonia Snail was described in 2018 during a genus-group revision; it is known only from subfossil material that was found near the south-eastern shore of Porto Santo, Madeira.

The species died out before the scientific exploration of the island, maybe even before the first humans arrived. [1] 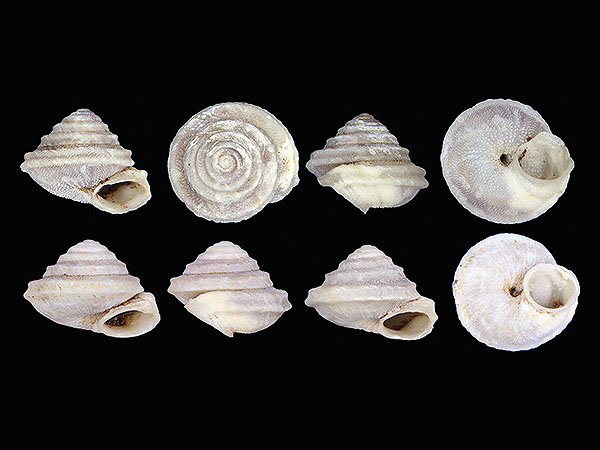 Walden’s Callina Snail was described in 2018 during a genus revision including many Madeiran land snail forms; it is known only from subfossil shells that were recovered from Holocene deposits near the southern coast of Porto Santo in the Madeiran archipelago in the Atlantic Ocean.

The shells reach sizes of around 1,57 cm in diameter; they are whitish (probably bleached) and have a closed umbilicus and a well-rounded rather than angulated or keeled last whorl.

The species disappeared before the island’s scientific exploration in the 19th century, maybe even due to natural causes like slight, local (non-human induced) climatical changes. [1] 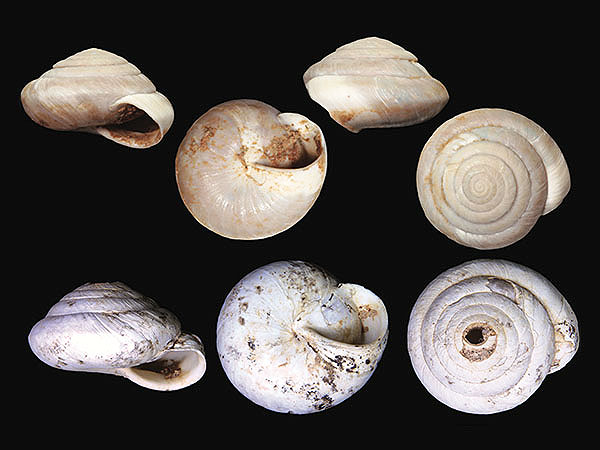 This species was described in 2018, it is known only from the southeastern coast of Porto Santo.

The species appears to have already been extinct before the scientific exploration of the island in the 19th century. [1]

This species was described in 1867, originally as a kind of a subspecies or variety of another species, Wollastonia vermetiformis (R. T. Lowe), or as a fossil form of a closely related recent species, Hystricella bicarinata (G. B. Sowerby) respectively.

The Small Hystricella Snail disappeared before the scientific exploration of Porto Santo in the 19th century, it probably died out due to natural changes in the microclimate of its habitat.

The Keeled Wollastonia Snail is known exclusively from Quaternary deposits along the southeastern coast of Porto Santo, Madeiran Islands, Portugal.

The species was described in 1878, originally as a kind of subspecies or variety of another species, Wollastonia oxytropis (R. T. Lowe), of which it differs by its larger size beside some other features like a more distinctly marked suture, the finer granulation, and the wider aperture. [1]

The Keeled Wollastonia Snail disappeared before the scientific exploration of Porto Santo in the 19th century, it probably died out due to changes in the microclimate of its habitat. 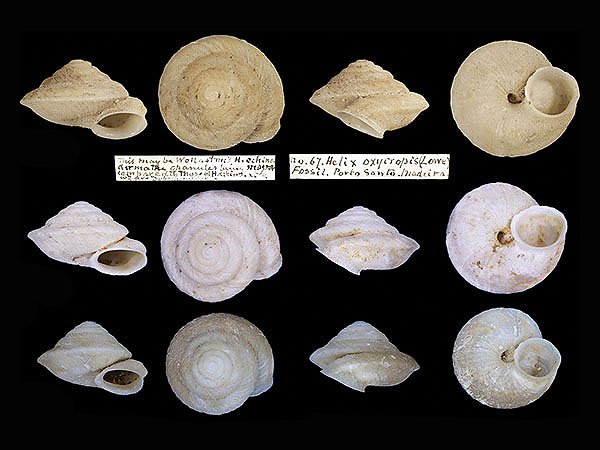 Bowdich’s Caseolus Snail was described based on subfossil shells that had been found abundantly in to Early- to Middle Holocene deposits on the islands of Madeira and Porto Santo in the Madeiran Archipelago.

The youngest known shells could be dated to an age of about 410 to 440 years, thus this species disappeared shortly after the first European settlers arrived on the islands, that is about 1550 to 1580. [1]

This up to now undescribed taxon is known only on the basis of subfossil remains that were found (quite commonly) on the island of Madeira. [2]

The Madeiran Thrush was a large, long-legged species, apparently adapted to a terrestrial lifestyle, it is not known if the species was flightless, but it was very likely a poor flyer and a typical tame (naive) island bird with no fear for humans or other mammals ….

Today, the only species of thrush inhabiting the island of Madeira is the native Blackbird (Turdus merula ssp. cabrerae Hartert) with a subspecies that also inhabits the Canary Islands.

There is a quite interesting account from 1823, made by T. Edward Bowdich, who apparently was the only person who has ever recorded this species, he even shot one on the island of Porto Santo.:

“We shot the falco oesalon; the upupa capensis, which I presume was not known inhabit so far north; the larus canus, said by the natives to be blown over from the African coast; the columba livia, of which there are large flocks; a turdus; the loxia enucleator, and a larger corythus.” [1]

About the thrush he makes to following additional comment.:

“The back and belly are brown, with patches of yellow, the wings and tail brown; the beak is strong, and of a brown colour, except the first half of the lower mandible, which is yellow.” [1]

The Porto Santo Rail was described in 2015, but its remains were already known for some time (as Rallus sp. ‘Porto Santo’).

The species was restricted to the island of Porto Santo, it was quite gracile but nevertheless completely flightless.

The Porto Santo Rail disappeared shortly after the Madeiran Islands were discovered and settled by Portoguese settlers at the beginning of the 15th century. [1]

Glass snails are so-called ‘semi-slugs’, that means, they still bear a more or less reduced and transparent shell, into which they cannot any longer move their body, at least not completely.

Several species are occurring in all over Europe with the most inhabiting the southern part of the continent.

The Solid Glass Snail was described in 1986, apparently basen on (sub)fossil shells which had been found on the island of Porto Santo in the Madeiran Archipelago.

The species is considered extinct. [1]