The Ou was described in 1789; it was already mentioned in an enumeration of birds found on the island of Hawai’i during Cook’s last voyage.

Originally, the species inhabited all of the Hawaiian main islands where it originally was very common and widespread, the birds undertook wide wanderings, likely even between islands, to exploit seasonally available food resources. They generally fed on fruits, mainly of the native ‘ie’ie (Freycinetia arborea Gaudich.) but they also fed upon insects

The species reached a size of about 17 cm; it showed a marked sexual dimorphism; both sexes were generally olive-green, had pink legs and feet and beaks, but the males had a bright yellow head. 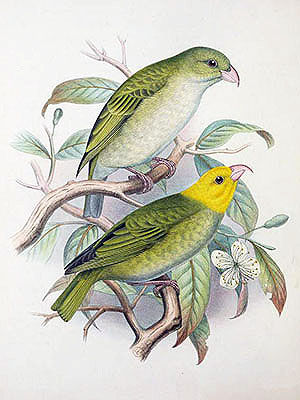