This species was described in 1976; it is, or rather was, restricted to the Ilha da Trindade, a volcanic island in the Atlantic Ocean, about 1150km offshore the east coast of Brazil.

Apparently, the species is known exclusively from empty shells, which differ greatly in their size depending on their collection date, foreshadowing the reasons for their final extinction.:

“Curiously, the shell length of the adult specimens analysed by Breure and Coelho (1976) averaged from 8 to 9 mm (which was an overestimation, our measures of the same specimens average 7 mm), while the ones collected by the MD-55 and later expeditions average 4.8 mm; the shell morphology, though, is the same. It is suspected that this reduction in size reflects inappropriate environmental conditions due to the Island’s much degraded environment.”

The native flora of the island is now largely destroyed due to introduced goats, this again led to the extinction of all native (and non-native, except for two spp.) land snail species! [1][2] 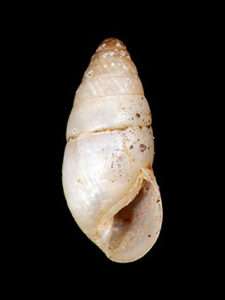 This species was described in 1971; it was endemic to the Ilha da Trindade offshore Brazil; it is apparently known from over 300 specimens.

The shells reach heights of about 0,95 cm.

The species disappeared sometimes during the 1970s due to the destruction of most of the native vegetation by introduced goats. [1]

Bruno’s Bulimulus Snail was described in 1917; it was endemic to the Ilha da Trindade offshore Brazil.

“Only the shell of B. brunoi is known; unfortunately, no complete animal has so far been recovered.” [1]

The species disappeared due to the more or less complete destruction of the island’s native vegetation by introduced feral goats. [1]