The Ivory Coast Byttneria is known only from a single herbarium specimen that had been collected in the rainforest of The Ivory Coast.

The species has never been found again and is considered most likely extinct.

The Mount Holland Thomasia was described in 1974, based on the type material that apparently was collected in 1929; it was restricted to a region somewhere near Mt. Holland in southern Western Australia.

The species is now most likely extinct. [1]

The oldest known specimen of this species was collected on the island of Tahiti, Society Islands in 1769 during Cook’s first voyage around the world, the species was subsequently collected only five more times with the last specimen having been taken around 1850.

The species was apparently more widespread in the Society Islands, as at least one specimen was found on the island of Bora Bora, this was described as a distinct species in 1981, however, was later downgraded to synonymous status. [1]

The Tahitian Pavonia disappeared at the middle of the 19th century.

This tree species is known only from a single locality in Langping in northwestern Guangxi, China, where it grows in forests on limestone hills at an elevation of about 1400 m above sea level.

The species has not found during recent searches and might indeed be extinct.

The Rose-colored Astiria was described in 1844, it was endemic to the island of Mauritius in the Indian Ocean.

The species had broad heart-shaped leaves and clusters of beautifully light pink-colored flowers.

This plant is now extinct. 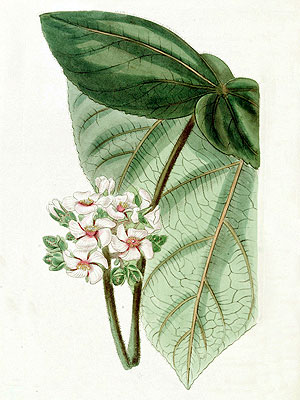 This species was described in 1854, it is apparently only known from the island of Maui, Hawaiian Islands, where it was found growing in sympatry with the very widespread Sleepy Morning (Waltheria indica L.) (see depiction below).

The Maui Sleepy Morning was later synonymized with that species but was subsequently resurrected in 2011; it may, however, indeed be nothing but an aberrant form of the common Sleepy Morning. [1]

If it, however, indeed was a distinct species, it is now definetly extinct.

This tree species was restricted to the subtropical forests growing on the Khasi Hills in Meghalaya, India.

The species is known from three collections, all made in the 19th century, with the last one dating to 1877; since then the tree could not be relocated and thus is now considered most likely extinct.

The Dwarf Ebony, also known as Saint Helena Ebony, was one of altogether three species within its genus, all endemic to the island of Saint Helena in the middle of the vast Atlantic Ocean.

The species was a smaller tree with beautiful white flowers, it was once quite common and covered the slopes of its home island; it was among the first plants that fell victim to the feral goats, imported to the island at the end of the 18th century, and who ran amok amongst the island’s endemic vegetation.

The genus Iliamna contains about seven species, all of which occur in North America.

Crandall’s Wild Hollyhock is known from altogether five collections, which all were collected in the years before 1937 near the city of Steamboat Springs in Routt County in Colorado.

The species is now considered most probably extinct.

This enigmatic species was growing exclusively around the city of Vranja in southeast Serbia.

The species disappeared (when?) after the destruction of parts of its habitat due to urban development by the city of Vranja, and the conversion of the remaining parts for agriculture purposes.

I have to admit, however, that the exact status of this plant (accepted species or synonym) seems not to have been clarified yet.

There is another form of marshmallow, the Kragujevac Marshmallow (Althaea kragujevacensis Pančić ex Diklić & Stevan.), which was thought to be restricted to the vicinity of the city of Kragujevac in Šumadija, Central Serbia.

This form was long thought to represent a distinct and now extinct, endemic Serbian species, but is now, however, treated as a synonym of the Common Marshmallow (Althaea officinalis L.).