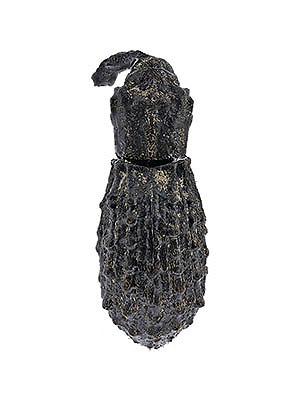 The genus Cotes is endemic to New Zeland, all of the about eight species currently assigned to it are probably feeding on decaying plant material.

The Benneydale Ant-like Flower Beetle is known only from subfossil remains that were recovered from deposits near Benneydale, a small town in the Waitomo District of western North Island, New Zealand.

This species appears to be extinct now.

This up to now undescribed species is known exclusively from subfossil remains that were recovered from deposits near Benneydale, a small town in the Waitomo District of western North Island, New Zealand. [1]

The species is now extinct, it is one of countless large insect species that were eaten into extinction by Polynesian Rats (Rattus exulans (Peale)) that had been introduced by the ancestors of the Maori when they first arrived in New Zealand.

The Giant Paua Snail is known only from subfossil shells that had been found in the Waikato region in the northern part of the North Island of New Zealand.

The shells could grow to a size of about 5 cm, that means the snails body might have reached lengths of about 15 cm.

The species very likely was among the first that were extirpated by the rats that had been imported by the first Polynesian settlers in the 13th century.

This species is known from three male specimens that were collected sometimes prior to 1854 at or near the city of Auckland on the North Island of New Zealand.

The species has not been recorded since and is considered possibly extinct by some authors, however, it might in fact be still existing since all members of its family are extremely small and understudied. [1]

The Waitakere Scurvy Grass was described in 2013 in the curse of a genus revision, it is known only from four herbarium sheets one of which had been collected in 1870 and the other three in 1917.

The species was restricted to the coastlines of the Waitakere Ranges on the North Island of New Zealand. [1] 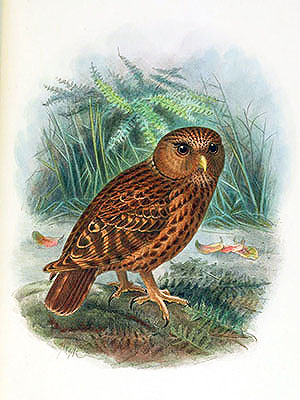 Adams’ Mistletoe was described in 1880, it is one of several mistle species that are endemic to New Zealand; it was apparently restricted to a few sites on the North Island of New Zealand. It was preferably growing on mamangi (Coprosma arborea Kirk.).

The species was last seen in 1954 on Sanitorium Hill, Maungakawa, near the Waikato town of Cambridge.

The reasons for the extinction of this species appear to be unknown, it is often thought to have disappeared due to browsing by the indroduced Brushtail Possums (Didelphis vulpecula (Kerr)), however, this seems rather to be unlikely. [1]

Markham’s Frog was described in 1987 based on subfossil remains that were found both on the North- as well as the South Island of New Zealand.

The species was larger than the four surviving congeneric species, reaching a body size of about 5 to 6 cm. [1]

This species was described on the basis of a single specimen, which had been found in the year 1867 in the Ruahine Range on New Zealand’s North Island.

The moth reached a wingspan of about 15 cm.

The type specimen, unfortunately, was lost in the 19th century, all that remained is the depiction, produced for the species description.

The caterpillars of the swift moths live in the wood of live and dead plants, they often reach remarkable sizes – some such giant caterpillars, which may have possibly turned out to be the larvae of Buller’s Swift Moth, had been found around 1985 in the Orongorongo Range on the North Island of New Zealand, however, they unfortunately died before they could pupate.

The Obtuse-glanded Scurvy Grass was described in 1892, the species were known from two populations on the North Island of New Zealand: one at the coastline of the Waitakere Ranges, and another one on the Miramar peninsula on the southeastern side of the city of Wellington.

The first of these population disappeared around 1917, the other one from Wellington was last seen in 1950, thus the species is now considered extinct.

The species is furtermore known to have hybridized with a close relative, Cook’s Scurvy Grass (Lepidium oleraceum G. Forst. ex Sparrm.) with which it grew sympatrically at at least one site, Seatoun, a suburb of Wellington. [1]

For a very short glimpse of time this species was about to “rise from the dead” – seeds, collected from a specimen that had been collected in the late 1930s was sown in 1993, and it indeed begun to germinate!

However, this experiment did not succeeded because the seedlings died shortly after.

The Waitomo Frog was described in 1987 based on subfossil bones that were excavated from a cave near the village of Waitomo on the North Island of New Zealand.

The species was about twice the size of all other endemic New Zealand frogs, reaching a body length of nearly 10 cm. [1]

Worthy’s Waitomo Beetle was described in 2002 based on subfossil material that was recovered from Holocene deposits from a cave in the Waitomo region on the north Island of New Zealand.

The remains are nearly complete and the species had reached a size of about 2,45 cm in length making it the largest known member of its family.

Worthy’s Waitomo Beetle was flightless which made it especially vulnerable to predation by introduced mammals like rats. [1][2]

The Waitomo Tussock Weevil is an up to date undescribed species that is known from several subfossil remains that were recovered from the deposits of a 14 m deep vertical limestone shaft on a farm in the Fred Cave Catchment in the Waitomo District in western North Island, New Zealand; additional material (at least one elytron) was also found in the deposits of the so-called Buried Forest of Pureora, which was buried under pumice ejected during an eruption of Taupo crater at around 186 AD..

It was a very large species, reaching a length of about 2,5 cm; it is a member of the species group that includes the Tussock Weevil (Anagotus lewisi (Broun)), thus is believed to have been associated with species of the native tussock grass (Chionochloa sp.) too.

The species is extinct, it fell victim to the Pacific Rats (Rattus exulans (Peale)), introduced by the Maori.

The New Zealand Swan was described in 1890 based on subfossil remains, which, however, were apparantly lost later. The name was then declared a nomen nudum and the species was redescribed (using only bones from Chatham Islands birds) as Cygnus chathamensis Oliver in the 1950s. [1]

The species was for some time thought to have been identical to the Australian Black Swan (Cygnus atratus Latham) (see photo), a species that was deliberately introduced to New Zealand in 1864, though there is evidence for self-introduction around this time and possibly prior to this. [1]

The remains of the New Zealand Swan were compared to those of the Australian species and it was found that both differed significantly from each other by their size, but only in 2017 DNA samples were compared which showed that both swan forms were indeed distinct from each other. The New Zealand Swan was closely related to the Australian Black Swan but differed from it by being larger and more stoutly build, it is furthermore split into two subspecies, one, the nominate, formerly inhabiting the main islands and one having been endemic to the Chatham Islands. [1]

The Huia is a very well-known extinct bird, it is furthermore well-known especially for its remarkable sexual dimorphism with the males and females differing so much from each other in the form and length of their beaks, that originally both sexes were described as distinct species respectively (see depiction below, which shows the heads of the female above, described as Neomorpha acutirostris Gould and the male below, described as Neomorpha crassirostris Gould).

DNA investigations on stuffed specimens in 2009 showed that some of the short-billed, alleged male individuals in fact were females; it is now assumed that probably all females had short beaks like the males when they were young, which then started to elongate subsequently. [1]

The species originally inhabited all parts of North Island, New Zealand, but was already pushed back to a few areas with small relict populations by the Maori in pre-European times.

The final end, however, came when the tail feathers, highly prized by some of the Maori tribes, were “discovered” by the European fashion industry as accessory for hats. The birds were shot in great numbers, and the former dense forests were cut down.

The last Huia were finally seen at the beginning of the 20th century, but there are sometimes rumors that they may survive somewhere in the deep forest of New Zealand’s North Island, yet, no such forest exists any longer, thus the Huia is and will stay extinct.