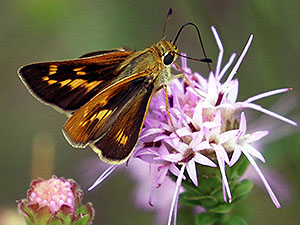 This form inhabited temperate deserts and sandy coastlines, it lost its habitat due to human population growth and development; it was last recorded in 1955 and is now considered extinct.

The La Brea Stork was described in 1910, originally based on fossil bones that were recovered from the rich La Brea Tar Pits in California, USA; however, the species was for more widespread and is now known to also have occurred in other parts of what today is the USA.

The species already appears in Late Pliocene deposits and disappeared at the end of the Pleistocene, but the population that inhabited the island of Cuba apparently survived well into the Holocene era and may even have been eradicated by the first human settlers.

The Florida Fairy Shrimp, described in 1953, was restricted to a single pool south of Gainesville in Alachua County of Florida, USA.

The sole habitat was subsequently filled in for development, thus exterminating the species.

The Thick-shielded Tortoise is known from fossil remains that can bedated to an Late Pleistocene to the earliest Holocene age, about 9500 BC, so falls just into the timespan that is covered by this blog.

The carapace of this rather large form reached a length of over 1 m.

King’s Cream and Brown Mottled Microcaddisfly was described in 1983 based on a single specimen, a male that had been collected in 1964 at a plant inspection station in the city of Miami, Florida, USA.

The species has never been found since and is thought to be extinct; however, it may well turn out to be identical with another species of its genus.

The Florida Long-horned Caddisfly was described in 1903, it is known from only a single, female specimen that had been collected at Biscayne Bay in Florida, USA.

The species is considered extinct, however, its taxonomic status is debatable.

The Three-tooth Triaenodes Caddisfly was described in 1938; it is known from populations in Alabama, Florida and Oklahoma, USA.

The Florida and Oklahoma populations appear to have been last seen in the middle 1930s, while the population in Alabama survived at least until 1991, when it was last surveyed; this species may in fact still be in existence, if so, however, its future expectations are rather bleak.

The Squaremouth Amnicola was described in 1968; it was found in rivers and streams west of the St. John’s River in eastern Florida, USA, it appears to have been restricted to certain types of waterways with sandy bottoms.

The species was not found at the known sites during the last surveys and is now thought to be possibly extinct.

The Chadwick Beach Cotton Deermouse was a subspecies of the Cotton Deermouse (Peromyscus gossypinus (Le Conte)) that was restricted to a small area along the coast of southwestern Sarasota County in Florida, USA.

The subspecies was described in 1939, apparently from specimens collected one year earlier, it was never found again and is now thought to be extinct.

The Ochlockonee Arcmussel was scientifically described in the year 1901.

The species lived exclusively in the Ochlockonee River in Florida, where it occurred obviously at only two places (Specimens, that were found in the Flint River in the Upson County in Georgia, were later identified as Southern Elktoes (Alasmidonta triangulata (Lea)).).

The habitat of the mussel was destroyed when in the year 1927 a dam was build to impound the Ochlockonee River for power production, and when the sections of the river, in which the species lived, were inundated thereby.

The last members of this species were found in the year 1931.

The former habitat of this species does not exist any more, it has been replaced by today’s Lake Talquin.

Woodward’s Giant Buzzard was originally known from fossil bones recovered from the late Pleistocene deposits of the tar pits at Rancho La Brea in California, USA, however, in 2004 subfossil bones found in Cuba were assigned to the same species.

The species appears to have survived in Cuba into the early Holocene period, when it was already extinct on the North American mainland. [1]

Woodward’s Giant Buzzard or Woodward’s Eagle was one of the largest species of bird of prey known to have existed.

[1] William Suárez: The Identity of the Fossil Raptor of the Genus Amplibuteo (Aves: Accipitridae) from the Quaternary of Cuba. Caribbean Journal of Science 40(1): 120-125. 2004

This, the nominate variety of the Narrowleaf Hoary Pea, was restricted to a small area in Dade County, southern Florida, USA.

The plant was last seen sometime in the 1990s and is now considered possibly extinct.

The Pallid Beach Deermouse was a subspecies of the Oldfield Deermouse (Peromyscus polionotus (Wagner)) that inhabited a small area of coastal sand dunes along the Atlantic coast of Florida, USA.

This form was quite abundant when it was described in 1939, however the populationds disappeared subsequently and no individual was found ever since, thus this subspecies is now redarded as being extinct.

The Carolina Parakeet was one of only two parrot species that are truly native to the USA (the other one is the Thick-billed Parakeet (Rhynchopsitta pachyrhyncha (Swainson)) which, however, is now extinct there and only survives in northern Mexico).

The species had a very wide distributional area in the southern USA, where it inhabited old-growth wetland forests along rivers and swamps. The parakeets had a preference for the seeds of the Rough Cocklebur (Xanthium strumarium L.) (see lso depiction below), a plant that contains toxic glucoside, making the flesh of the birds poisonous to predators (the American naturalist and painter John J. Audubon noted that cats apparently died from eating them).

The Carolina Parakeet was considered a crop pest and birds were shot by the thousands. Some also ended in the feather trade, in which it apparently was especially popular to dye the originally very colorful birds completely black – such blackened specimens are still kept in several museums.

The last known Carolina Parakeet, a male named Incas, died in the Zoo of Cincinnati, Ohio at February 21, 1918. Yet, in the wild the species apparently survived for several years longer, this can be assumed from eggs that are kept in a museum and that had been collected in Florida in the year 1927.

The Carolina Parakeet wasn’t particularly popular in the aviculture, especially because of its loud, harsh voice, however, the ornithologist Hans Freiherr von Berlepsch at the end of he 19th century kept a free-flying population in Germany which, being well-adapted to the European climate was thriving very well. This little population, that could have been the lifeline for the whole species, however, was shot by the innkeeper of a little pub in a neighboring village within only two days.

The short-faced bears, so named for the shape of their skulls, which appear to have a disproportionately short snout compared to other bears, are a subfamily (Tremarctinae) of the bears that are/were restricted to the Americas. Only a single species survives until today, the Spectacled Bear (Tremarctos ornatus (Cuvier)) of South America.

The Florida Spectacled Bear, described in 1928 based on fossil bones from Pleistocene deposits, inhabited the southern parts of North America, including Mexico, as well as Florida, Georgia, New Mexico, and Tennessee, USA.

The species differed from its South American counterpart by its much larger size and its heavier proportions.

The Florida Spectacled Bear was mainly a Pleistocene species and disappeared at the end of that epoch, however, bones of the species, found at Delvil’s Den, a flooded karst cave in Florida, were dated to an age of about 8000 BC, indicating that the species may have survived for a somewhat longer time. [1]

This species was described in 1948, it known only from the city of LaBelle, Florida, where it was found on the Caloosahatchee River drainage.

It was described based on a single adult male alone, which appears to be very similar to another species, the Inconspicuous Long-horned Caddisfly (Oecetis inconspicua (Walker)), and both could potentially be misidentified with each other.

The Little Meadow Long-horned Caddisfly may be extinct, but this is rather unlikely.