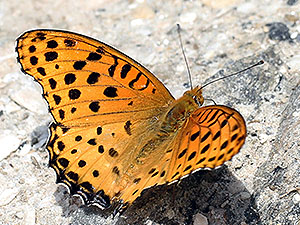 The Taiwan Ringed Butterfly was described in 1909, it was for some time considered a subspecies of the Small Three-ringed Butterfly (Ypthima norma (Westwood)) from the South-East Asian mainland.

The species seems to be endemic to the island of Taiwan.

The Taiwan Ringed Butterfly reaches a wingspan of about 3,4 cm; its wings are mainly brownish grey colored, the forewings have one eye spot each.

The Taiwan Ringed Butterfly is said to be extinct, however, I was not able yet to gain any further information; a subspecies (Ypthima posticalis ssp. aei Shirôzu & Shima) does apparently still live on the Philippine Islands, however, this is probably rather to be treated as a distinct species.

Guichard’s Glasswing Butterfly was described in 1949. [1]

The species is said to have inhabited the marshy areas and swamps of Lepkempti (very likely Lekempti) in Ethiopia; this and the surrounding areas have been drained for agricultural purposes.

The species is now most likely extinct.

The biology of this form is not well known, it was apparently last recorded in 1969, it is supposed to be extinct, but might in fact still exist.

The Willamette Fritillary is an undescribed subspecies of the Callippe Fritillary (Speyeria callippe (Boisduval)) that apparently was restricted to the Willamette Valley in northwestern Oregon, USA.

The form is now considered extinct.

The Atossa Fritillary, also known as the Unsilvered Fritillary, was described in 1890, originally as a full species, it was restricted to an area approximately at the borders between the three counties of Kern, Los Angeles and Ventura in southern California, USA.

The adult butterflies were found in open canyons wherever water was present, they were attracted by many wildflowers, but seemed to have had a special preference for the flowers of the California Buckeye (Aesculus californica (Spach) Nutt.). The larval food plant was a violet species, yet the exact species was apparently never properly recorded but is suspected to might have been the Oakwoods Violet (Viola purpurea ssp. quercetorum (M. S. Baker & J. C. Clausen) R. J. Little).

The Atossa Fritillary was last recorded in 1959 when two specimens were collected, respectively in 1960 when a last individual was spotted on the peak of Mt. Pinos in the Los Padres National Forest on the boundary between Kern – and Ventura counties.

There have been many field searches since the last sightings, yet all of them were unsuccessful, the Atossa Fritillary is extinct. [1]

The Guam Sailor was described in 1916 and was not seen since, however, the origin of the type material seems to be questionable.

“The type locality seems hihly improbable and the author’s brief description might apply to several of the Malaysian subspecies.
None in BMHN.” [1]

The species may have been identical with the Common Sailor (Neptis hylas (L.)) (see photo) respectively one of its several subspecies.

This species was described in 2011, it is known only from two males that had been collected in 1919 in the state of Paraná, Brazil, and which are now deposited in the Natural History Museum, London.

The Parana Owl Butterfly reaches a wingspan of 7 cm, it is quite similar to the Ornamented Owl Butterfly (Orobrassolis ornamentalis (Stichel)) (see photo) which again is the only other species in the genus. It differs by the more robust, darker brown dorsal bands on its hindwings, and by subtle differences in male genitalic structures.

The Mariana Wandering Butterfly was restricted to the islands of Guam and Rota in the southern part of the Mariana Islands chain.

The butterfly inhabited the forests on the lime cliffs wherever Luluhut (Maytenus thompsonii (Merr.) Fosberg), the food plant of its caterpillars was found. [1]

The local name of this butterfly is Ababbang (in Chamorro), bzw. Libwueibogh (in Carolinian).

The species was last seen on Guam in 1979 and is considered as being extinct at least there, the last record of the species on the neighboring island of Rota took place in 1995, when only some male specimens were found but no female ones nor any eggs or caterpillars.

The Mariana Wandering Butterfly is now most likely globally extinct.

The Leanira Checkerspot (Chlosyne leanira (C. & R. Felder)) is a species of butterfly that occurs with at least eleven subspecies over the southern parts of North America including Mexico and parts of the USA.

At least one of these subspecies, the obsolete Checkerspot, is now apparently extinct, it was restricted to a small area in California and was last seen sometimes prior 1956. 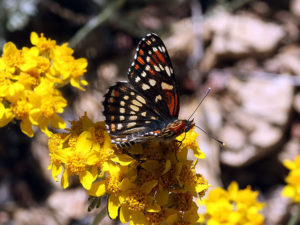 Myrtle’s Fritillary, also known Myrtle’s Silverspot, a subspecies of the Zerene Fritillary (Speyeria zereneSwainson) (see photo), was described in 1945, it was restricted to Pescadero Point in San Mateo County in California, USA.

The larvae are known to have fed on the Hookedspur Violet (Viola adunca Sm.).

Myrtle’s Fritillary was apparently last recorded around 1919 and is now considered extinct.

The taxonomic situation of this form, however, is not finally solved and thus it might be identical with another form, the Point Reyes Fritillary (Speyeria zerene ssp. puntareyes Emmel & Emmel), which is restricted to the southernmost Sonoma County of california, and which itself is highly threatened.